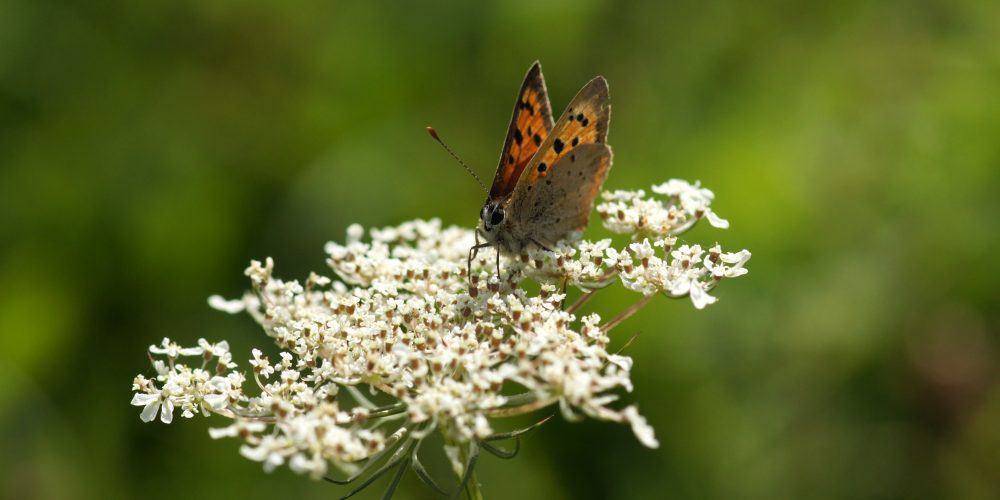 Fencing, gates and water troughs for livestock were put in, and the site was left to naturally regenerate. Over a period of time, a wide array of flora and fauna began to colonise the site, making it an idyllic place for walks in all seasons. The Trust has planted fruit trees, hedges and specific wildflowers. The site now boasts a mixture of wildflower meadows, with black knapweed, vetches and birds foot trefoil covering the clay soil. There are large, open patches of bare soil to allow basking spots for butterflies to warm their wings on a sunny day before feeding on flowers and hunting for mates. Common spotted orchids can be found in huge numbers, showing their wonderful display of colours and patterns.

Much of the originally dug out clay workings still reside in areas, and there are large pits with good scrub coverage that provide habitats for birds, butterflies, moths and even some reptiles and amphibians. Some of these pits become ponds during a wet spring for frogs to lay eggs, while others provide clear soil banks for ants and wasps to burrow in.

In recent years, to help manage the wildflower meadows and reduce the coverage of large swatches of bramble, North Ronaldsay Sheep from a local breeder have been introduced. The sheep have done a great job selectively grazing around wildflowers and removing bark from smaller saplings, as well as new leaves from bramble patches. The iconic Box Moor Trust Belted Galloway cattle can also be seen grazing at the site, pushing through the dense scrub and bramble that sheep cannot get at.

Fauna of the site
The site hosts a few locally rare moths and butterflies, as well as having the only record of grass snakes on the whole Box Moor Trust estate. The Dingy Skipper, a butterfly which feeds on many of the flowers present at Bovingdon Brickworks, including Bird’s foot trefoil, Bugle, Ragged Robin and Buttercups, are breeding in ever increasing. The butterfly is currently in decline nationally, and is especially scarce in Hertfordshire. The same is said of the Garden Tiger moth, a BAP species which has been found on the site in recent years.

One of the largest colonies of Brown Argus butterflies in Hertfordshire have also been recently recorded on the site. These feed and breed on Geranium spp. As well as ragwort and other flowering plants.

Lesser Whitethroats have been recorded breeding on site, and if you visit during May, you are very likely to hear the unmistakable sound of the cuckoo, having returned from Africa where it overwinters.

Newts also breed in the pond, and in many of the old clay pits that fill with water, as well as providing a home for frogspawn during wetter years.

The fantastic conservation work done at the Brickworks has been completed primarily by a hardly group of local volunteers, many of which originate from the village and have walked on the site for most of their lives. Work completed by the volunteers includes removing ash trees to improve the sunlight to ground flora, pulling ragwort and treating invasive species found on the site such as Japanese knotweed and goat’s rue, assisting with livestock checks on our lovely group of sheep and cattle, and surveying the site for the wildlife found there, among many other tasks.

Please note that dogs walked on the Brickworks site must be under close control and on a lead in fields that contain livestock.
If you would like more information about the Brickworks and volunteer at the brickworks, please email [email protected]