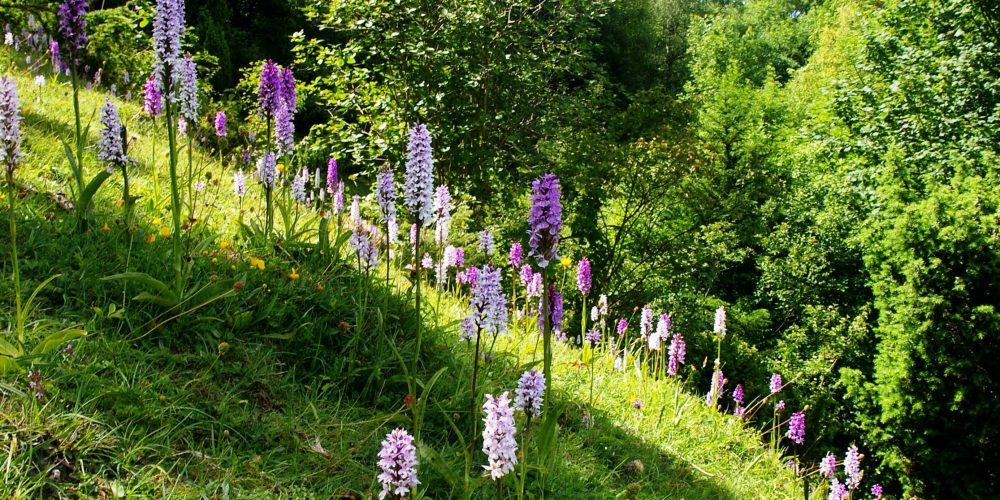 Roughdown Common is a site of Special Scientific Interest, therefore an important area for wildlife.

An old chalk quarry forms part of the site and a mosaic of chalk grassland exists amongst adjacent hawthorn scrub. Meadow fescue and meadow oat-grass are dominant with frequent crested hair-grass, quaking grass and common knapweed. Large thyme, common milkwort and eyebright are widespread on the site, whilst the steep slopes of the pit contain glaucous sedge, dwarf thistle, carline thistle and autumn gentian. Amongst the scattered scrub are found twayblade, common spotted orchids, a good colony of pyramidal orchids and the occasional fly orchid. Juniper is frequent and here is able to regenerate naturally, the only county locality where known to do so.

Faunal interest extends to a wide range of rare and local invertebrate species and a colony of bats that use the old mine.

Over the years self-set trees have spread over the chalk grassland and consequently this has encouraged scrub to grow over and replace the grass. In order to encourage the reestablishment of chalky species originally found on this site, The Box Moor Trust is working in conjunction with Natural England to reduce the tree and scrub cover.

Management of the Common includes scrub clearance and opening up several of the grassland areas. Objectives consist of reducing scrub cover on the site, thinning around the junipers and other specimen trees to allow them to spread, and grazing the grassland areas with cattle or sheep in the spring and late summer. The grazing regime will be flexible, in relation to the many variables inherent in such an undertaking.

If you would like to read the full agreement between the Box Moor Trust and Natural England please download the plan below.