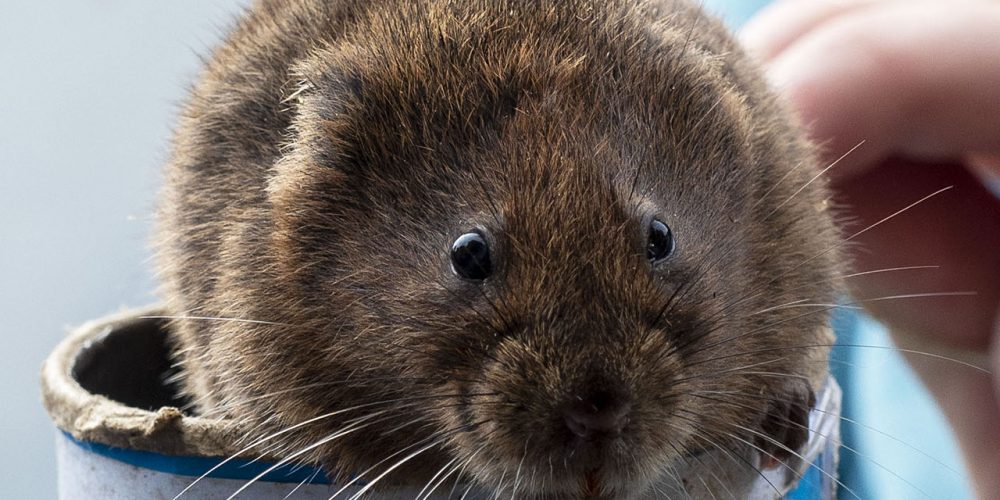 If you walked along our local river and canal in the 1950’s and 1960’s or you have read ‘Wind in the Willows’ to children and grandchildren then there is  good news. After more than 30 years, Ratty is back! The Water Vole, made iconic by the wonderful book by Kenneth Grahame and follow up films and cartoons, is being returned in good numbers this month as part of a key project by the Box Moor Trust.

WHY DID THEY GO? 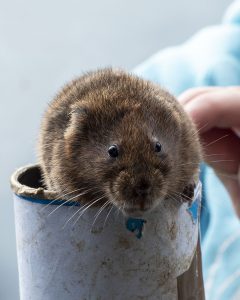 Water Voles were once common and their tell tale ‘plop’ into the water from a far bank branch followed by the sight of a  brown mammal moving along the surface of the water was a welcome sight. Sadly, they disappeared in local waterways and most of the country in the latter part of the 20th Century. Reduction of habitats, poor water quality and piling of canal banks started the decline but the major problem was the spread of non-native Mink as a result of escape and deliberate release from Mink Farms. Mink are vicious predators taking birds, eggs and all small mammals. The female can enter the small tunnels dug out by Water Voles and eats the young. There is no way that the two can survive together.

Numbers were down 90% nationally at one time and total extinction throughout the British Isles loomed. Thanks to a few introduction schemes, there is hope for its future but there is a long way to go. There are a few small remaining populations in Hertfordshire, notably at Rye Meads and on the Chess near Sarratt but these are cut off and endangered. The chances of a natural return to our area are remote because there are none between Watford and Tring on the canal or the Gade and Bubourne Rivers.

SO WHAT WAS THE ANSWER?

The Mink had to go and the habitat had to be right. A project planned by the Box Moor Trust with the help of Martin Ketcher (Water Vole Officer) from the Herts and Middlesex Wildlife Trust began 3 years ago and has involved much hard work by volunteers to monitor Mink and get habitats right. It has also needed help from local fishery managers to reduce Mink and this has been a key element of the project.

It has been a dream of many local people to see the Voles return but it has taken a lot of planning. It would not have been possible without our volunteers. Affinity Water and the Canals and Rivers Trust have provided crucial grant funding. The funding pot began, though, with a welcome bequest from the will of local artist Sheila Jackman who lived on a barge locally in the 1950’s and loved Water Voles. It just shows how much good can come from a bequest to a charity in a will.

SO IS THE TIME RIGHT?

The award winning River Bulbourne improvement in Boxmoor supported by the Environment Agency was a major step forward. The protection to the river banks by the initially unpopular fencing has produced an ideal chalk stream habitat. There are also miles of stream, river and canal bank owned by the Trust elsewhere locally that are good habitat. Mink numbers have plummeted in Boxmoor. The monitoring of Mink Rafts over 3 years  has backed this up.

One totally unexpected large furry ally has assisted with the project. Indeed, it appears to have completed the job as far as Mink are concerned! The improving local habitat has attracted Otters which have been gradually moving west across the country. It is recognised that Otters are not welcome news to Fishing Clubs but one  local club, recognising the law protecting them, has already taken the wise decision to erect electric Otter Fencing which is less expensive than losing large carp. Don’t Otters eat Water Voles? Yes – they do – but it’s a level playing field which has worked over centuries. Otters are too big to enter Water Vole holes, so they can exist side by side.

SO WHAT IS HAPPENING?

The Box Moor Trust introduced 177 Water Voles to the River Bulbourne and the local canal on 3rd September. The voles were captive bred in Devon. A national expert, Derek Gow, who has dealt with a number of introductions across the Country has advised throughout. A large Team of Trust volunteers is placing special pens in a number of locations and the voles are to be  fed throughout the week in their pen to acclimatise them. They are then released to fend for themselves. Members of the Trust’s Junior Wildlife Rangers will enjoy the experience of feeding and releasing them. 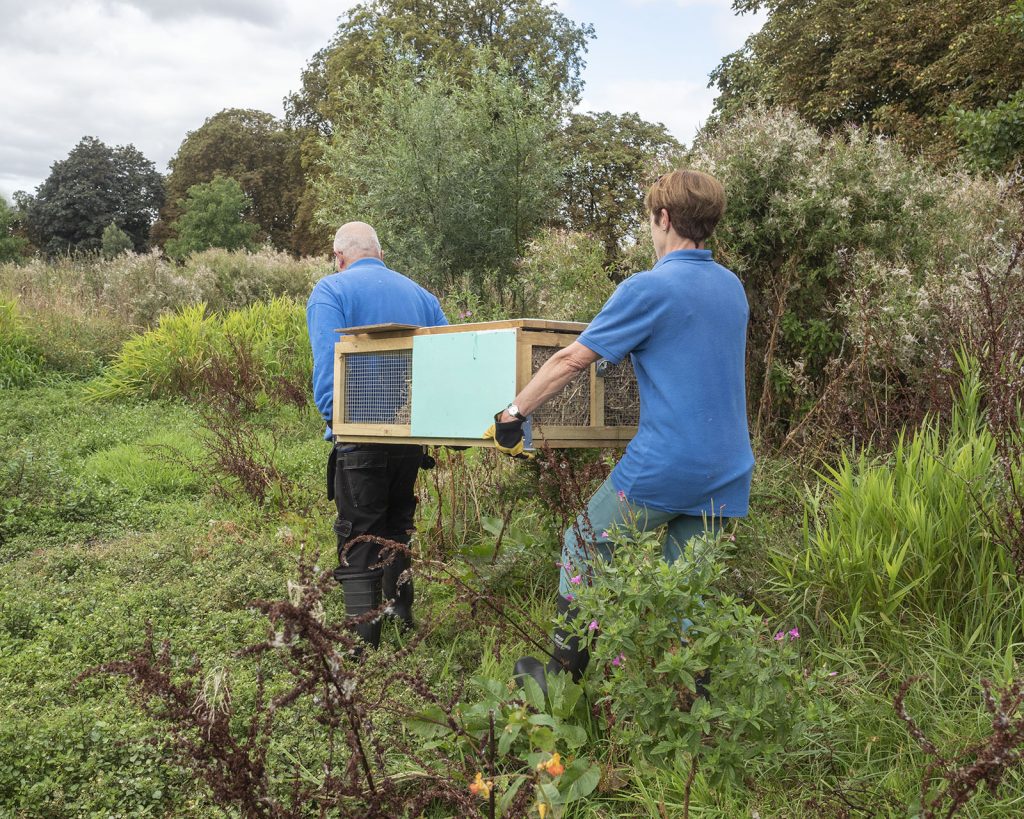 A couple of our hardworking Volunteers transporting a Water Vole to his new home.

The Water Vole must not be confused with a Common Brown Rat which have pointed faces, pink scaly tails as long as their body and big pink ears, Water Voles have blunt faces, tails that are 75% of their body and tiny concealed ears. Although brown rats can and do swim you don’t see it that often. Water voles can be seen by day as they swim short distances along the side of the bank. Water voles grow to 36 centimetres, including tails and rats grow to 55 centimetres, again, including tails.

This is only the first of  3 phases. More voles will be introduced in different parts of the Trust land for 2 more years subject to securing funding. The vision is that this project will bring about a successful and sustainable local population. If so it could be important on a wider scale as it could  then  be a catalyst to see other land owners work with the Herts and Middlesex Wildlife Trust to bring the Voles back from Tring to Rickmansworth.  The only way to secure lasting success in the South East Region is for lots of Agencies and landowners to work together. We must keep Mink under control, so continued effort by Fishery Managers will be a huge help. Mink will slip under electric fencing so they are still a menace to fisheries if they return. 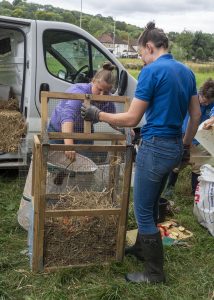 Transferring the Water Voles in to the pens.

Water voles are wild animals. Once released they will naturally disperse in various directions. Many will  only live around a year in the wild but some might reach 2 or 3.  We hope they will breed straight away and with gestation and transition to adulthood only taking some 7 weeks,  there could be young fit enough to face the winter by the beginning of November. Lets hope for a mild winter to get them going. A pair can raise 3 broods of 4 or more  young a year. They need to! Even without Mink, they have a lot of potential predators. In our area, Herons, Foxes, Brown Rats, Kestrels and Pike are the key enemy. Whilst Red Kite eat mainly carrion, they will certainly take an unwary Water Vole.

So we have to accept that a number  will disappear very quickly, but if half the expected 85 breeding pairs survive the winter and Mink can be kept at bay, there is a really good chance.

We have to concentrate on our own project but, longer term, the best chance for a sustained population locally is for a successful introduction to be organised in the Gade and Canal  between the Grove and Cassiobury Park, where Herts and Middlesex Wildlife Trust has a reserve. Male voles naturally seek out other populations and have been known to cover up to 8 miles. If our voles could travel from Apsley to Cassiobury Park and find a mate there and others travel in the reverse direction this would also provide contact to those in the river Chess and beyond. So the Herts and Middlesex Wildlife Trust has a key role here if they can get support of landowners and appropriate funding.

If you look at the map and details  on the ColneCan website  you will see that the river network locally is extensive and that many habitat improvements have been or are planned to be carried out. 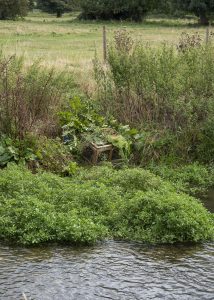 Yes – in many ways

Firstly, please keep your dogs under reasonable control in the river along the Moor. There are wide shallow areas for them to splash and collect balls but the narrow deeper glides are areas for wildlife that would be badly disturbed if dogs are freed to swim up and down the river. This is a rare chalk stream habitat. It just needs a little care to keep it that way and if you spread the word to others that would be a great help.

The Box Moor Trust hopes to introduce more Voles in two more annual phases to increase the genetic base and increase the chance of success. Any grant, sponsorship, donation or bequest would be a huge help  for this project or indeed for other special wildlife projects carried out by the Trust.

You can also help by reporting Mink sightings to the Trust or volunteering to monitor water Voles. If you want to join our volunteer monitors and receive training, then please contact our admin team on 01442 253300. If you want to help the Wildlife Trust to increase their efforts elsewhere in Hertfordshire then do look at their website: hertswildlifetrust.org.uk.

MINK – GROWS TO 62 CENTIMETRES – SLIGHTLY LONGER THEN A RAT

The Box Moor Trust’s efforts for wildlife are working. For example, we now have regular breeding Barn Owls after years of effort and rare butterfly species flourish. This proves that wildlife can thrive near a growing town